"Jewish Life on Cape Breton Island” has been the title of multiple projects dedicated to research of the same topic. It has been a radio program, a series of sound pieces, and a curated environment at York University. Through local collections created by members of the community, archival research relied not only on the expertise of the archivists at the Beaton Institute, but the expert knowledge of the individuals that collected the materials in the first place. While collecting these materials for the Diversity Cape Breton web portal there was a unique opportunity to, as Srinivasan et al write, “reconsider the nature of the catalog, and how new technologies allow different sorts of engagement with local descriptions and vernacular accounts from diverse expert communities.” (2006, pp266) Both the Chernin collection and the Dubinsky family recordings held at the Beaton became instrumental in curating a space at the Gales Gallery, York University, for former residents now living in Toronto.

Context: The Future of Ethnographic Museums

The Gales Gallery exhibit responded to a conference that happened at Oxford University’s The Future of Ethnographic Museums. The conference addressed how scholars conceptualise an ethnographic museum, or gallery space. For the purposes of this research, the curated ethnographic space is designed to house materials from a community or culture that indicate what sort of lives and rituals took place there. Conventionally, ethnographic work results in a monograph - providing the reader with a history of a given region and particular cultural customs. The gallery space here provides me the opportunity to present an unfinished work, and an unfinished history. There is no prevailing narrative appended to the Jewish communities, let alone the other immigrant communities from Cape Breton, for example Ukrainian and Polish communities. This exhibit was meant to make visible the vulnerability of this kind of research: the accounts and conflicting accounts of events, the memories of an island that has changed so drastically in the 20th and 21st century.

In May of 2014, I connected with several families based in the Toronto area and put together an exhibit of photos and sound recordings I found in private collections. York University graciously hosted the event, which coincided with the Canadian Anthropological Society Conference. The event brought together a diverse group of people: anthropologists, folklorists, ethnomusicologists, scholars of Jewish studies, members and former members of the Jewish community from Cape Breton, and good friends.

At the event, I wanted to ask questions of the community as if they were my own family. I wanted to do so respectively and without presumption. This exhibit is the site of my inquiry and curiosity. The space was not meant to be entirely self explanatory, nor complete. Upon first entering this gallery, I felt overwhelmed by the authoritativeness of the space. Even if I were to cover the walls with photos, I needed to find a way to bring people there for discussion and interviews, not for a passive viewing. Accordingly, the descriptions and opinions elicited from Jewish Cape Bretoners during the curated event in Toronto could be used as curatorial feedback for the web portal. It would be community engagement and interactivity that would make this exhibit impactful not only for the residents in attendance, but for the future of their online presence.

To welcome the attendees, a panel of scholars spoke about East and Central European communities and Jewish migrants in Canada. Dr. Marcia Ostashewski gave attendees a glimpse into the experiences of Ukrainian, Polish and Black communities on the island, with more similarities than differences amongst them. Dr Randall Schnoor provided insight into the experiences of other Jewish communities, beginning in small towns and moving into larger city centres. Knowing that no collection of objects will accurately depict life on the island for every individual within the community, photographs and auditory media were selected to provide an insight into particular events and experience cultural environments in Sydney, Englishtown, New Waterford and Glace Bay as experienced by present and past members of the Jewish community. Additionally, these media were left unlabelled to encourage dialogue between gallery visitors from the island. While no single member of the community knew the names and stories of each person photographed, collectively members were able to identify, and discuss the lives and relations of those photographed.

Photo 1: Former residents discuss a photo at the Gales Gallery

Rather than overcome the challenges of multi-sited ethnography, my aim as a researcher was to use media to work with these obstacles. Even 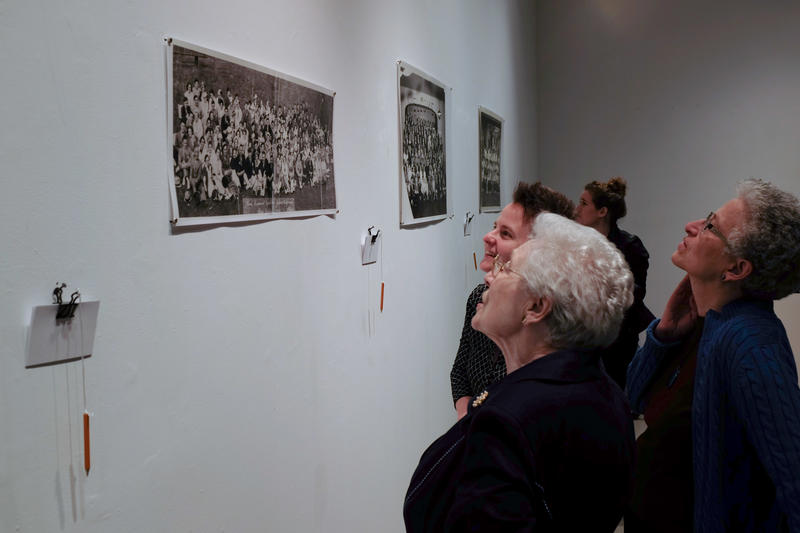 with ample time to research the particulars of events that occurred and precisely where events took place, I hypothesised that it would be more productive to ask these questions of the participants, ostensibly crowdsourcing the research to create collaborative oral histories. Invited attendees were simultaneously interviewees, many of which were recorded with a handheld camcorder or audio device. Recording visitors provided sensorial information and cultural associations to photos that could not be included otherwise. These recordings emphasize the thingness of the senses: rooting cultural experience in sensory experience. As Harris and Guillemin write, “the researcher should be methodologically attuned to the senses and the complex ways that the sensory is tangled with other forms of experience and ways of knowing (Mason & Davies; Pink).” (2011, pp692)

Photo 2: Visitors to the gallery listen to Sound Maps

The exhibition space held many different kinds of media. As one entered the room, the first thing one could engage with were sound maps, with 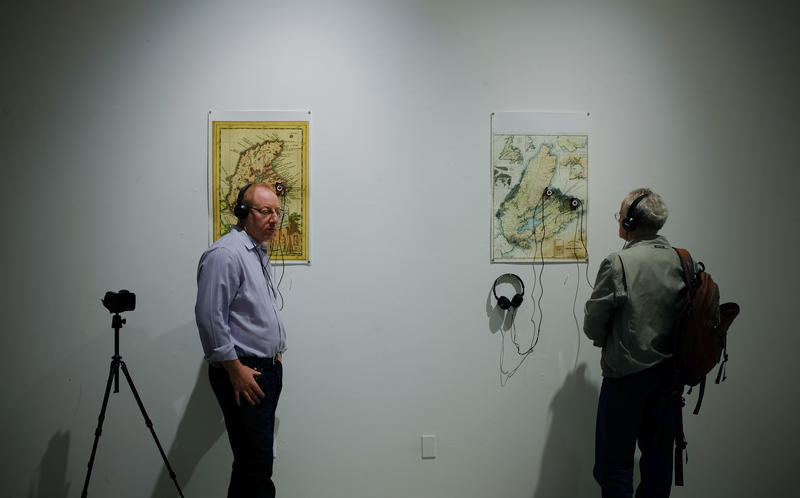 headphones dangling off the walls for listening. The maps themselves tell common stories of the island: as British, as Irish, as Scottish, as a uniquely enchanting part of the Canadian landscape. But listening to the recordings told a very different story. Each marker, a little red iPod not unlike the red place mark on Google Maps, played a series of interviews, CBC broadcasts that feature members of the Jewish community, their cultural and musical activities, and some sound recordings I made in commonly visited areas of Sydney.

The photos were from Shirley Chernin’s collection held at the Beaton Institute. They were left unmarked, so that community members can identify people, places and buildings freely. The photos were meant to trigger memories and act as conversation starters. The majority of these materials are from Glace Bay. I started with materials I was most familiar with, it seemed to me that it would be unfair to curate using materials that belonged to people I do not know personally. And so this exhibit was an invitation those with their own collections to get involved. The exhibit was an invitation for former members to react to the sights and sounds of their lives and their families’ experiences on the Island. The web portal Diversity Cape Breton encourages members of the Jewish community to contribute to a living archive, and help preserve their rich cultural heritage.