Large-scale Ukrainian immigration to Canada began at the end of the 1800s. The government of the Dominion of Canada enticed many to come, particularly to settle the western prairies and develop that region for agriculture. This appealed to many Ukrainians, who saw little hope for prosperity living in their homeland. What are today Ukrainian lands and peoples were, at that time, governed by the Austro-Hungarian and Russian empires.

Ukrainian immigrants were also encouraged to come to Cape Breton Island to work in the burgeoning mining and steel industries. The descendants of these early immigrants tell of steel company agents circulating at Pier 21 in Halifax, speaking with new immigrants as they disembarked from their trans-Atlantic voyage and stepped onto Canadian land. Many Ukrainians who came to Cape Breton wrote letters to family and neighbours back in their homeland, describing jobs and life on the island ~ which led to still more Ukrainians immigrating and settling in Cape Breton:  a chain of migration…

“It will probably never be established who the ﬁrst Ukrainians were in Nova Scotia. It was only in the 1921 census that provisions were made to include Ukrainians as a group distinct from other ethnic groups. Suddenly, 63,788 Canadians stated that their ethnic origin was Ukrainian. Of these, 389 lived in Nova Scotia. However, this number is far from accurate since individuals arrived [here] prior to 1902. Two groups came from Bessarabia and Podila (Husatyn) and another group arrived in 1907 from the province of Bukovina.”

- Strangers in the Land:  The Ukrainian Presence in Cape Breton, page 12

A large concentration of Ukrainian immigrants to Cape Breton settled in the Whitney Pier district of the city of Sydney on Cape Breton Island. Whitney Pier is a triangle-shaped area of land on the northern boundary of Sydney. Ukrainians were drawn to ‘the Pier’ by jobs in the local steelworks. In the Pier, they settled among other immigrant groups, including substantial Jewish, Italian and Caribbean populations, and other eastern European groups such as Croatians and Poles. Ukrainian immigrants also settled in other areas of industrial and rural Cape Breton: Glace Bay, Dominion and Birch Grove. These communities grew with the expansion of local mining activities.

“At the present time the population of Cape Breton is cosmopolitan in character. Representatives of the Indians, the original inhabitants, still survive. There is a considerable French Acadian population, especially in Richmond and Inverness. Many of the inhabitants of Sydney and the neighborhood are descendants of the United Empire Loyalists and of members of the British forces who took part in the ﬁrst English settlement. A large migration to this island from the Highlands of Scotland, which lasted over a considerable period of time, has given Cape Breton, especially in the rural districts, a large Scotch population. During the earlier days of the coal mining industry, many miners were brought out from England. There has been a constant inﬂux to the sections round the eastern coast from the western shore of Newfoundland. Most of the Newfoundlanders who have come over were formerly ﬁshermen, and were the descendants of dwellers in the western counties of England. Finally, the growth of the coal and iron industries has led to the arrival of a large mixed population, including Americans, English, Italians, Austrians, Swedes, Germans, and negroes from the United States, who are employed about the blast furnaces at Sydney.” Present-day western Ukraine was then part of Austro-Hungarian territory.

- Cape Breton Canada at the Beginning of the Twentieth Century:  A Treatise of Natural Resources and Development, page 14

Cape Breton’s Magazine Issue 27 featured the story of Ukrainian immigrant Mike Oleschuk in its “Conversations with Steelworkers.” The story tells of his immigration experience and coming to Canada on a Polish passport, early years in Cape Breton his relations with immigrants of Ukrainian and other ethnocultural groups, labour and work experiences, 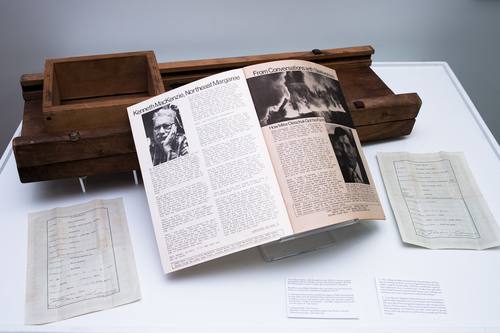 and how he eventually got his farm. It begins: “I was born in Austria. And then after the war (WWI), it became occupied and called the Ukraine. And then in 1918-19 the Polish occupied it. And with the Polish passport I came to Canada. But my nationality is Ukrainian.” Also featured here are the naturalization papers of Mike Horechuk and his wife Mary. Note the spelling of their surname has since been changed to reflect a more accurate pronunciation. Also note that their origins are described as in “Poland” and “Austria” – and Mike’s original home is noted as in the region of  “East Galicia.” Magazine donated by the Centre for Cape Breton Studies, Cape Breton University, and naturalization papers donated by Anne Horechuk. 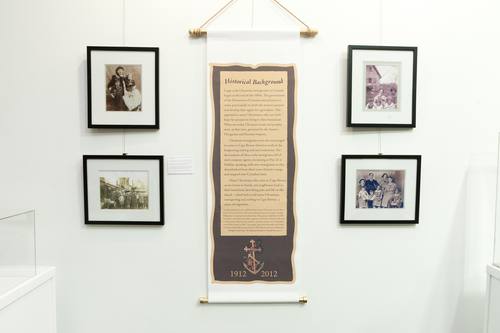 This group of photos is of the Zwarun family, who settled in Glace Bay on Cape Breton Island. The photo to the left of the banner, above, was taken in 1926, before the immigration of Maria (nee Eleniak) Zwarun and her two children. Below, John Zwarun stands amongst other immigrants on the ship at Pier 21 in Halifax. This photo was taken in the fall of 1926. To the right of the banner, above, this photo of the Zwarun family was taken circa 1932, a few years after immigration. It shows the young family somewhat established, with their first house in the background. Below, circa 1934, the family gathers for a portrait in a Glace Bay studio . Photographs donated by Steve Zwarun. 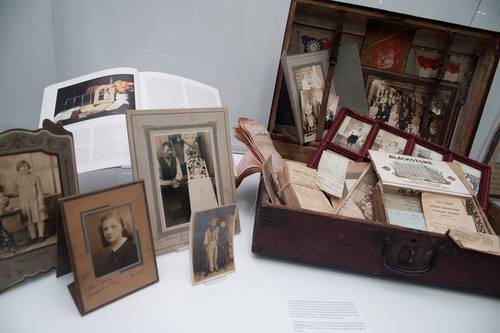 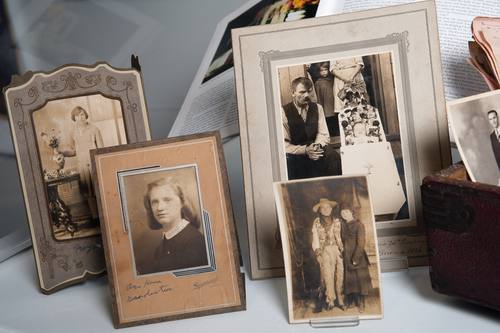 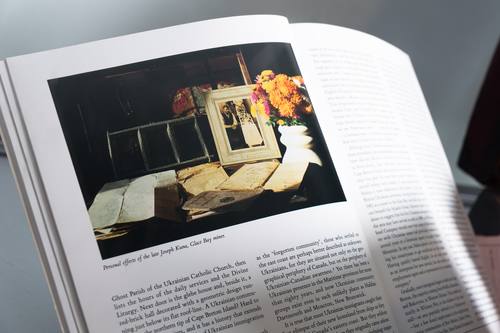 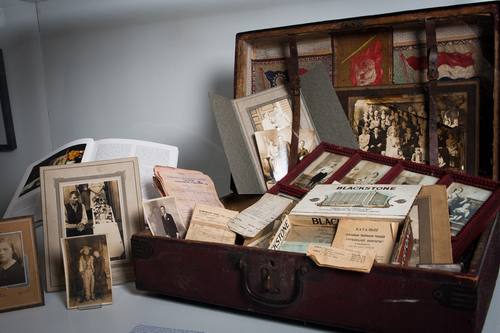 This suitcase belonged to Joseph Kuna who settled in Glace Bay in the early 1900s, and worked in the coalmines. In this case, he collected items that tell us about his life in Canada. Amongst the items in the case are pay stubs, letters from friends in the old country and letters from immigrant friends who had moved on to other parts of Canada. Various photos show members of his immediate and extended family. A pamphlet lists items that can be mail-ordered from the Ukrainian bookstore, notably, music recordings. Joseph Kuna’s suitcase was photographed and included in Jars Balan’s Salt and Braided Bread (1984), in a section attending to Ukrainians who settled in Maritime Canada. Balan’s book is included in this display unit and open to the photo. Suitcase and items donated by the family of the late Michael Kuna. Book donated from author Jars Balan, donation to the Holy Ghost Ukrainian Catholic Parish.